February 12: This was the date Dyatlov had originally predicted as their arrival from Mount Otorten to Vizhay, from which they would send a telegram to UPI to let everyone know they had made it back.

February 14: After realizing that the trip was going to take longer than initially expected, Dyatlov pushed their arrival date in Vizhay back to this. He asked Yudin to relay the information to UPI, but apparently Yudin forgot to pass it along.

February 15: A man on duty at UPI’s sports club raised the alarm when there was still no sign of Dyatlov and his group.

February 17: Fireballs were noted in the sky above the Ural Mountains. Later investigation revealed that these fireballs were accounted for.

February 20: The prosector of Ivdel, Vasily Tempalov, was notified that the Dyatlov team hadn’t yet returned. He appointed a 22-year-old lawyer named Vladimir Korotaev to run the investigation.

February 21: Searchers – consisting of UPI students, the military, local Mansi tribesmen, and police –  began looking for the Dyatlov group. UPI sent the head of their military department, George Ortyukov, to Ivdel, where he managed to convince the authorities to allocate airplanes and helicopters in the search.

One group of searchers was led by Yuri Blinov and another by Sogrin, both UPI students who had just returned from their own expeditions in the Urals and were better informed of the conditions of the region. Another expedition, led by Vladislav Karelin, was still in the area and joined the search effort. A group of prison guards from the gulag in Ivdel, headed by Captain A.A. Chernishev, also joined the search. Lieutenant Potapov headed a group of policemen. Another three groups of UPI students were formed, headed by Oleg Gerbennik, Moses Axelrod, and Boris Slobstov.

February 24: Eugene Maslennikov, a member of the Sverdlovsk Tourist Club that was in charge of approving routes for tourist groups, was appointed field operations manager of the rescue teams. Mansi hunters reported a “fresh” bonfire and a leveled patch as if for a tent on the Auspiya River, so authorities decided to drop the rescue groups along the entire Dyatlov route.

February 26: Boris Slobstov and Michael Sharavin, both UPI students and close friends of the group, found the abandoned tent on the slope of Elevation 1079. At first, when they discovered no bodies, they were optimistic that they would find their friends hiding out somewhere nearby. By their own admission, they disturbed the scene at the tent quite a lot, even going so far as to rip their way into the tent upon its discovery – making it difficult to determine just which cuts were made by the tourists since some of the tarpaulin was missing. This was also the day that Prosecutor Tempalov opened the criminal investigation. There has been some confusion and speculation regarding the official opening of the criminal investigation. The official reports state February 26, but on front of the file it says February 6. Many people use this as evidence that the government was involved, that they knew about the event long before anyone else did and had already opened an investigation. While this is possible, I doubt that it is probable. Perhaps the 2 was worn off or someone mislabeled it. In any case, I am not in any position to say why the front of the file says February 6.

February 27: Searchers George Atmanaki, Vladimir Lebedev, Vladislov Karelin, Alexey Chernyshov, and some soldiers studied the tent. Two members of the rescue operation stumbled upon the bodies of Krivonischenko and Doroshenko at the cedar tree near the remains of a small fire; the bodies were laid carefully side by side. Then Dyatlov’s body was found approximately 400 meters from the bodies of Krivonischenko and Doroshenko, followed by the discovery of Kolmogorova’s body about 500 meters closer to the tent. All the search parties were reassigned to cover elevation 1079. Eugene Maslennikov was appointed Chief of Staff. A camp for 36 people was set in the Auspiya Valley that evening. 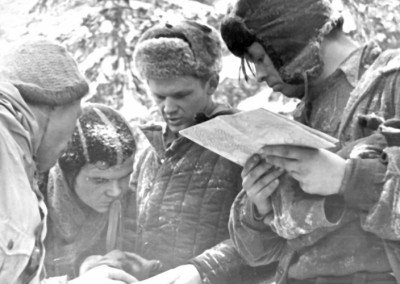 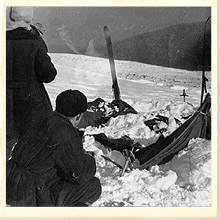 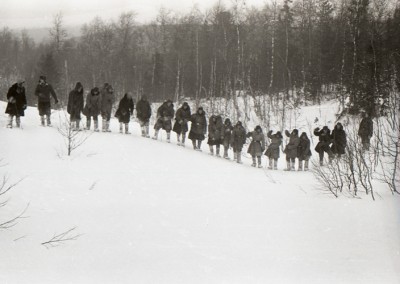 One of the search teams.

February 28: Prosecutor Tempalov studied the tent and Vadim Brusnitsyn (who was a good friend of Kolmogorova and Doroshenko) helped sort the contents of the tent. Michael Sharavin and Eugene Maslennikov witnessed the examination of the tent and its contents.

The contents of the tent:

1. Camera “Zorky” with a tripod and broken filter

2. Camera “Zorky” with deep scratches on the case and a ripped belt

9. Slobodin’s notebook and money and a letter from the UPI trade union to the city administration

16. A trip document in the name of Dyatlov

19. Passport in the name of Dyatlov

March 1: The cache, also known as a labaz, was discovered by Vadim Brusnitsyn and Michael Lebedev. They found 55 kg of gear and provisions, including Slobodin’s mandolin, clothes, ski shoes, and a pair of skis. Moses Axelrod and Sergey Sogrin arrived at Elevation 1079; the tent had already been transported back to Ivdel by that point.

The lawyer Vladimir Korotaev was dismissed from the case. Prosecutor-criminalist Lev Ivanov, the most skillful professional in advanced investigative techniques from the Sverdlovsk Prosecution Office, joined the investigation.

March 3: Most of the UPI students returned to Sverdlovsk to resume their lessons.

March 4: Moses Axelrod and Sergey Sogrin examined Elevation 1079 to see how likely an avalanche would be. Their examination concluded that an avalanche was extremely unlikely, so much so that it was immediately ruled out by the investigating team as the cause of the incident.

Boris Vozrozhenny and his assistant, Ivan Laptev, performed the autopsy on the first four bodies.

March 5: Slobodin’s body was discovered along the path between Dyatlov and Komolgorova’s corpses.

March 8: Slobodin’s autopsy was performed by Boris Alekseevich Vozrojdenniy (spelling of his name varies from source to source).

May 4: After the spring thaw began, the bodies of Kolevatov, Thibeaux-Brignolles, Dubanina, and Zolotarev were found in a ravine roughly 70-75 meters from the cedar tree. They had built a small shelter there lined with twigs and clothes collected from their deceased comrades, but none of the bodies were actually found in the shelter. They were found a few feet away in a creek, though if that is where they died or if they were washed that way by melting snow is uncertain.

May 9: Autopsies were performed on the remaining four bodies – Zolotarev, Thibeaux-Brignolles, Kolevatov, and Dubanina – by Boris Alekseevich Vozrojdenniy.

May 28: The investigation was officially closed, citing an “unknown compelling force” as the cause. 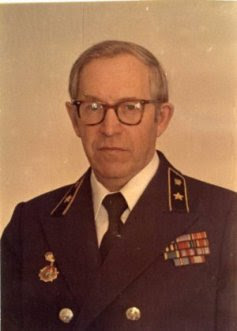